Up until recently, animal microbiology was seen as a “small science” because it dealt with such tiny microbes who were believed to have very little real-world impact. But recent research revelations have shown that microbes may be driving and enhancing the lives of humans and animals more than we ever realized. Interactions between production animals and their native microbiota have been shown to affect growth efficiency, carcass quality, food safety, animal health, and even mental health in humans. Over the past five years, the UGA Department of Animal and Dairy Science assembled a highly collaborative team of researchers who can incorporate the understanding of the microbial impact on animal production. By integrating our understanding of the microbial population with meat science, animal nutrition, animal reproduction, animal health, and food safety, these “small scientists” are poised to make a large impact on animal production in Georgia and worldwide.

As pictured from left to right, Osman Koyun, Dr. Todd Callaway, Dr. Jeferson Lourenco, and Mikayla Dycus. They are part of the faculty and graduate students conducting microbiology research in Animal and Dairy Science. Each person pictured has their specific research interests, but they all share one common goal: to utilize microbiology to benefit the food animal production system. The main purpose of all of their research has been to study how microbes affect animal health, productivity, and final products (e.g., meat and dairy products). This team has become a central pivot to improve the sustainability and precision of animal production in the southeast. 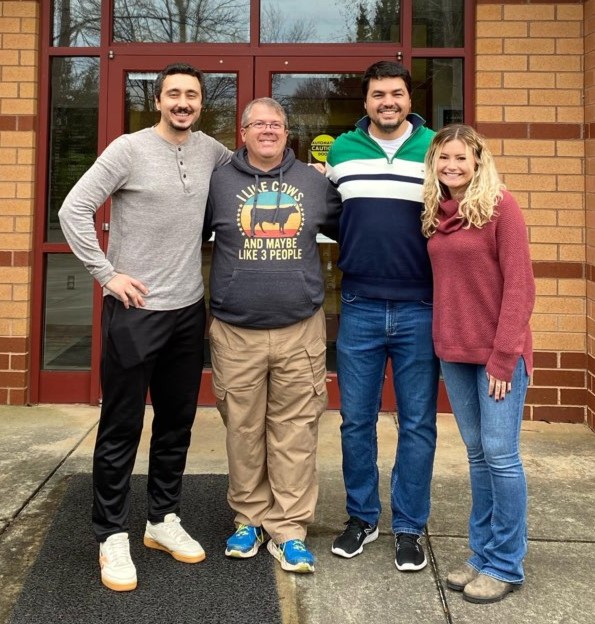 Dr. Todd Callaway is a ruminant microbiologist who grew up on a small horse, dairy, and beef farm and received his B.S. and M.S. degrees from the University of Georgia in Animal and Dairy Science in 1993 and 1996, and his Ph.D. degree in Microbiology from Cornell University in 1999. Following graduate school, Dr. Callaway joined the Agricultural Research Service of the USDA (USDA-ARS) in 2000 and served as a research microbiologist in College Station, Texas. Dr. Callaway focused on the intestinal microbiome and the impacts of diet on the microbial population and host susceptibility to pathogen colonization. His research at UGA focuses on the role of the ruminal microbes in the nutrition of cattle, and how the complex environment of the cattle gastrointestinal tract can impact food safety. Since he arrived at UGA, he has worked with the Food and Agriculture Organization (FAO) to devise international strategies to keep E. coli O157:H7 and Salmonella from entering the food chain in beef, dairy, and pork products.

Osman Yasir Koyun, originally from Turkey, is a fourth-year Ph.D. student under the direction of Dr. Todd R. Callaway. Osman received his DVM degree from Firat University, Turkey. He came to the UGA with a scholarship granted by the Ministry of National Education of his home country. Thanks to this scholarship, he earned his M.S. degree in Poultry Science under poultry nutrition specialist, Dr. Woo Kyun Kim, UGA. After completing his M.S., he joined Dr. Callaway’s laboratory to work on a project in which the goal is to improve the microbiological safety of poultry meat through employing spraying technology and antimicrobial agents. Along with this project, he also investigates changes in the native microbiota on poultry carcasses as they go through processing operations.

Dr. Jeferson Lourenco started his career managing commercial farms in Brazil (dairy and beef-producing farms) and accumulated almost a decade of experience in that role. After moving to the U.S., he pursued his Masters and Ph.D. at the University of Georgia. His master’s program focused on feeds and nutrition of ruminants, while his Ph.D. studies expanded into the fields of microbiology and bioinformatics. Dr. Lourenco has been working with microbiology applied to animal sciences, bioinformatics, and biostatistics utilizing several animal species (particularly cattle, chicken, and swine). His research relies heavily on metagenomic approaches; however, he is also interested in the biologically relevant metabolites (e.g., short-chain fatty acids) produced by microorganisms, which may have a significant impact on animal health and productivity.

Madison Mikayla Dycus is a first-year Animal Science Master student under Dr. Jeferson Lourenco. Mikayla obtained her Bachelor’s Degree in Animal Science with a minor in African Studies from the University of Georgia. Mikayla grew up on a second-generation poultry and cattle farm in Northwest Georgia, where she developed her passion for agriculture. To prepare for graduate school, Dycus participated in undergraduate research, was a Purina Feed Sales Intern, and worked in the monogastric Nutrition Lab under Dr. Michael Azain. Mikayla and the ruminant nutrition team are currently working to link the genotypic, phenotypic, and microbiome data of beef cattle to improve their growth and efficiency, as well as the accuracy of Expected Progeny Differences in Angus cattle.

This team of “small scientists” has been a huge part in expanding the innovation of animal science which is microbiology. However, they have not worked alone. Animal and Dairy Science’s Animal Microbiology Team works in a transdisciplinary space that integrates aspects of reproduction, meat science, nutrition, genetics, medicine, and environmental science. For example, in conjunction with Dr. Dean Pringle and Dr. Daniela Lourenco to determine the interactions in a “3-handed poker game” between the microbial population, cattle genetics, and carcass quality. Dr. Pedro Fontes and Dr. Jillian Bohlen are reproductive specialists who are collaborating with the Micro team to understand what role the native microbiome plays in maximizing conception rates. Swine production is also impacted by the microbial population of the gut, and Dr. Robert Dove from ADSC and Dr. Hea Jin Park from Foods and Nutrition are frequent collaborators on projects to understand how microbes impact swine production efficiency. Dr. Sha Tao and Dr. Valerie Ryman are working with the team to determine new techniques to reduce the spread of pathogenic bacteria that can lead to mastitis. The Animal Microbiology Team has also worked closely with Dr. Frank West and the Regenerative Bioscience Center to understand the interactions with the native microbiome and systemic inflammation in the gut and throughout the body of animals. Further collaborations with Dr. Alex Stelzleni, the USDA-Ag Research Service, UGA Poultry Science, and the Center for Food Safety have focused on reducing pathogenic bacterial loads on carcasses and cuts of meat. Ongoing collaborations with Iowa State, UC-Davis, and Auburn all examine facets of the microbe-animal interface and their impact on environmental sustainability and human well-being. The Microbiology team is also working with several companies on validating their pathogen reduction processes and producing probiotic cultures for use in cattle and swine to improve their efficiency and health. Microbiology in Animal Science today is no longer a minor player in animal production and human health. Microbiology requires extensive collaboration to study and understand the actual depth that the microbiome entails. The microbiology team of the Animal and Dairy Science department are all major players in this “small science” and are dedicated to making life better for producers and consumers in Georgia, nationally, and globally.